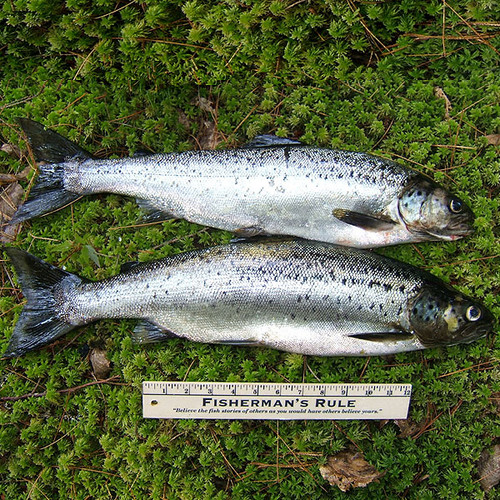 We make Fisherman's Rulers for this last group. You see, even though the ruler is only 7" long it will measure a 12" fish (get it?).

Like most old-time rulers it has a nugget of wisdom printed on it. No, not the Golden Rule, the Fisherman's Rule: "Believe the fish stories of others as you would have others believe yours". Put this ruler next to your catch when you photograph it and your fish grows instantly. Your friends will be impressed and envious. Here's a picture of two beautiful landlocked salmon I caught recently. Aren't you impressed?

Put several of these water-resistant rulers in your tackle box because when your buddies see you measuring your fish they're going to want one too. Just don't try to fool the warden!